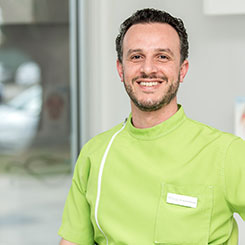 Dr Hossam El Sanabary graduated from the University of Ain Shams in Cairo, Egypt in 2000. Hossam made the move to Wagga Wagga with his wife in 2006, lucky enough to escape the hustle and bustle of big cities to work at private dental practice for over 14 years.

Hossam’s dentistry skills are constantly expanding. With a special interest in Orthodontics, Dr El Sanabary has been practicing orthodontics for the past 9 years and has successfully completed his Graduate Diploma of Orthodontics in 2020 with distinction from James Cook University.

In addition to that Dr El Sanabary loves helping patients with their basic needs in restorative dentistry, crown and bridge, root canal treatment, implant dentistry and cosmetic dentistry. After hours, Hossam enjoys relaxing with his wife and kids, playing soccer, water polo, and bike rides with his mates.

Dr. Ghazy graduated in Cairo, Egypt in 2003, and started his dental career working as a Senior House Officer in the university hospital. 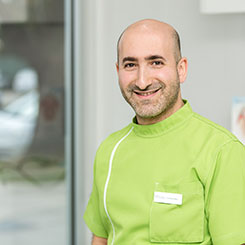 In 2005 Ahmed decided to do the Australian Dental Council (ADC) examination and qualified as an Australian dentist in 2006.

In 2007, Ahmed moved to Wagga Wagga and joined a private dental practice for nearly seven years.

As part of ongoing commitment to continuing education and to bring the best level of care to his patients, in 2018 Dr Ghazy completed his master’s degree in fixed and removable prosthodontics through the prestigious King’s College London.

Dr. Ghazy is interested in all aspects of dentistry, with special interest in cosmetic dentistry, veneers, implants, rehabilitation of broken and worn down teeth, endodontics, crown and bridge.

Since moving to Wagga Wagga, Ahmed and his wife have been blessed with a little boy and girl. In his spare time, Ahmed enjoys spending time with his young family, playing soccer for the Lake Albert club, table tennis and bike riding.